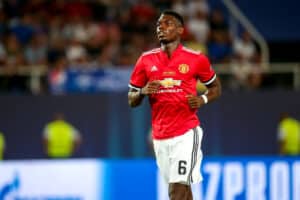 One Premier League fixture sticks out more than any other next weekend: The Manchester derby. Pep Guardiola’s Manchester City team travel to Old Trafford on Saturday for a game against their bitter local rivals, Manchester United.

The two clubs are neck and neck in the table – United fifth on 19 points; City a point behind in sixth – and gaining ground on their rivals after sluggish starts to the season. Supporters and the atmosphere they create are a huge part of what makes derbies entertaining. Ole Gunnar Solskjaer would have loved fans to be present for this gargantuan fixture, and with restrictions lifting across the UK concerning fans attending sporting events, pencilling in this clash for a ‘welcome back’ party of sorts wasn’t unrealistic.

However, the tiered system of Covid-19 restrictions lifting means that ‘tier 3’ areas like Manchester cannot yet enjoy the same privileges as tier 2 counterparts like London. England’s capital is one of many cities across the UK allowed to welcome 2,000 fans to watch football matches. The higher the tier, the tighter the restrictions, and tiers are assigned according to the rate of infection in a particular area.

According to a report by Goal, United are now hoping that they will be able to bring fans back for the game against Leeds on December 20. The reason they are pinning hopes on this date is that it falls four days after the UK Government meet to revise the Coronavirus restrictions. With tensions high between the government and Mayor of Greater Manchester Andy Burnham, there will be pressure to allow the area to live by the same rules as other areas of the country.

While the Theatre of Dreams will be without supporters in attendance, it will be the subject of fascination for television audiences around the world. The Manchester Derby of March 2020, which United won 2-0, broke the record for Premier League viewership in America when NBC broadcast it.

Bookmakers anticipate plenty of betting activity on the game, and they are making wagering more enticing by offering big odds on the home side. The likes of Bet365 are going long on United winning the game despite their superior league position and recent run of good results against City, winning three of their last four encounters. While United can be erratic, they are always worth a bet when Bruno Fernandes is in the team.

The Portuguese playmaker is an early contender for Player of the Season and consistently fulfils the role of catalyst for a United attack that is full of goalscoring potential.

Fans have been allowed to attend matches across Europe for several months now. UEFA rules restrict clubs to 30 per cent of their stadium’s capacity; however, most top leagues on the continent don’t get to this figure because of additional local governmental restrictions.

The coming weeks showcase some of the best match-ups across the ‘Big Five’ leagues with Inter Milan hosting Napoli in Serie A; PSG taking on Lyon in Ligue 1; Bayer Leverkusen welcoming Bayern Munich to the BayArena for Bundesliga action; Real Madrid locking horns with city rivals Atletico Madrid in La Liga, and many other potential slobberknockers.

Anyone considering placing a wager on these matches should weigh up the benefits of using a promo code. Bookmakers typically allow new users to avail of promo codes, allowing them to utilise an offer such as a free bet or a special bonus. Punters can find the most lucrative promo codes currently on offer on Sportytrader. There will be plenty of football to watch over the Christmas period, and with restrictions lifting, you might even get to attend a match in real life.

Read more:
How the Manchester Derby and other big European fixtures will be affected by Covid-19

City of London suffers £2.3 trillion loss of trade due to Brexit in a single month

Investment opportunities in the Midlands highlighted in new report