Here we go again! Those who disagree with allowing more pork imports during this ongoing African Swine Fever (ASF) outbreak in our country are shouting “betrayal” by President Duterte of the interests of the hog producers.

This is 2019 all over again, except that this time no legislators have joined the reformers in keeping pork affordable to the Filipinos.

On April 7, the President issued Executive Order (EO) 128 lowering the tariff rate on pork imports, from 30% to 5% on pork imported under the minimum access volumes, and from 40% to 15% for out-of-quota imported pork.

The lastiko (elastic) EO did not appease the critics. The lower tariffs will be kept down for only three months. After three months, the tariff rates go up to 10% and 20%. In a year’s time, they revert back to their old rates.

This EO, even if it permanently lowered the tariff reform, which I hoped it should have been, will not “kill the industry” for two reasons. One is that the world pork market is itself affected by the ASF disease. Even if the world can supply all the pork that we need, the other reason why it cannot flood the local market is that we have limited cold chain capacity to receive all the imported pork. With this EO, imports are expected to increase. According to the President of the Meat Importers and Traders Association, Jess Cham, pork imports may double their present scale.

The world’s pork market has its own supply constraints, particularly during these years that ASF is affecting not just the Philippines but also most of the countries in the Asia and Pacific region. China, which had its first outbreak in 2018, is getting the biggest share of the import market. Because of the virus, we can only import from ASF-free countries.

We also have our constraints. Receiving additional frozen imported pork requires cold chain capacity, which we don’t have. According to a national cold chain road map study which the Board of Investments commissioned, cold chain capacity in the country is at 400,000 tons. About a third of that is exclusive for onions, tuna, sardines, and bananas. The rest is general warehousing for which meats, other seafood, dairy, other fruits, and other vegetables compete for space.

According to Anthony Dizon, President of the Cold Chain Association of the Philippines, their services cover only 40% of all food traffic along the country’s food supply chains. Without cold chain capacity, imported pork offers weak competition to local producers. International food safety standards on meats require that the product be sold off in no more than two hours under ambient temperature. Longer exposure makes the meat vulnerable to microbial contamination, which goes from bad to worse exponentially. Mr. Dizon estimates that the country needs another 300,000 metric tons of capacity from the present level.

With the rubber-band EO, additional cold chain investments because of it would only be limited, likely made by the more risk-taking members of the cold chain industry. Projected Increase in Imports Supply and use statistics of the Philippine Statistics Authority indicate that in the last five years where data is available, 2015-2019, the average import penetration was 12% of gross supply (see Figure 1). In 2019, 286,502 tons of pork were imported and the average for the last five years (2015 to 2019), was 260,602 tons. 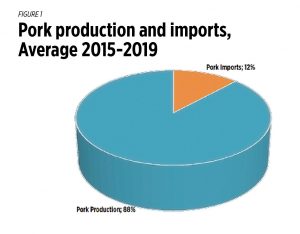 Suppose we simulate what might happen because of this EO. With the current world market supply constraints and our cold chain capacity limitations, let us take Mr. Cham’s projection that imports would double to 500,000 tons.

Average production in the last five years, following PSA’s supply and use statistics, was placed at about 1.895 million tons. Because of ASF and the time it takes to arrest the disease so the country can re-herd and make up for lost inventory, Girag & Associates Sarl projects that local production would go down by 50% from 2020 to 2021, or about 537,000 tons.

The expected imports would just make up for the loss of local output due to the ASF virus. The import penetration would have more than tripled from 12% to 38% of gross supply due to, 1.) the doubling of imports to 500,000 tons, and, 2.) the decline of production by about 500,000 tons. This is no reason to be alarmed, even for local producers. The displacement of local production is not due to imports but because of our current problem with the ASF disease.

We should be alarmed if we did not expand our imports. Without this lastiko EO, we would have a shortage of about 200,000 tons, the difference between the expected decline of production of 500,000 tons and the current imports now of about 300,000 tons. In that situation, pork prices will increase, encouraging more substitution away from expensive pork to other sources of protein. This may sound ironic but imports will be helping producers keep the market for them while they are rebuilding their inventory.

It is possible, but improbable, that the other regions not currently hit at all or just mildly hit by the ASF virus can expand their pork production and export their surplus to the NCR, Metro Cebu, and other densely populated cities. That is not likely to happen, since ASF is still spreading and the culture of biosecurity has yet to sink in not just among producers but to all of us. Bringing pork or processed pork from one region to the other can spread the virus, and that is just part of our practice of pasalubong (bringing gifts home after a trip). Backyard farmers will have to cluster to rebuild their production in closed farms, which can more easily be defended from the virus.

That culture will take some time to sink in. In the meantime and in an environment with the ASF virus still spreading throughout the country, investments in added capacity in the regions now lightly hit or not at all by the virus, are not expected to grow as fast as the demand for pork in population centers. 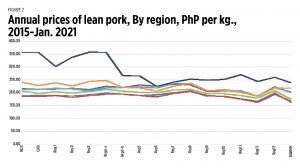 Without this EO, prices are expected to increase further. The trend towards higher prices is illustrated in Figure 2. In January 2021, the last data on prices in PSA’s website, one can see the prices to be significantly higher than the annual prices from 2015 to 2020. Higher pork prices can be avoided if imports would temporarily make up for lost production due to ASF. To me this is the benefit that EO 128 is offering all of us, not just consumers, but even pork producers. To me the benefit to producers is that the prices, if kept reasonably low, maintain the market for pork producers and dampen the substitution of pork with other sources of meat.

Ramon L. Clarete is a professor at the University of the Philippines School of Economics.

A pork crisis averted… for now

Wrongheaded: Private import of vaccines ‘at will’