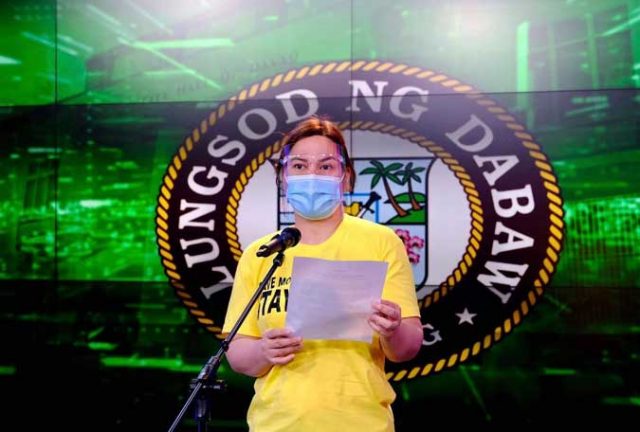 THE daughter of Philippine leader Rodrigo R. Duterte says there’s no chance she’ll run for the presidency next year. Her father says the presidency is no job for a woman.

But few are convinced by either of them as campaigns grow to back Sara Duterte-Carpio, 42, to succeed the autocratic and capricious president whose war on drugs killed thousands and whose embrace of China has convulsed historic ties with Washington.

“It is the clamour of the people that will make her run,” said Mar Masanguid, who led the movement behind the hugely popular 76-year-old Duterte’s last minute presidential bid in 2016 and has now founded a group to back Sara Duterte.

Sara Duterte’s image is as down-to-earth as that of her father in a country where tough plays well: she once punched a court official who challenged her; she rides big motorbikes; her children are nicknamed Sharkie, Stingray and Stonefish.

Opinion polls show her far ahead of other potential candidates for the 2022 election when Duterte must step down after one six-year term.

But Sara Duterte told Reuters she had thought carefully and decided not to try to extend the political dynasty to the presidency after succeeding her father as mayor of the southern city of Davao.

“I made a chart where I listed the whys and why nots before I decided that I am not going to run,” she told Reuters, adding that she hadn’t even told her father the reason.

That hasn’t stopped the campaigns.

Posters, banners, stickers, t-shirts, calendars bearing the younger Duterte’s image with the words “Run, Sara, Run” have popped up across the archipelago of 108 million people. Her supporters say she has nothing to do with the campaigns.

“Run, Sara, Run” calls have increased among the millions of Filipinos abroad, a key support base of Duterte.

In Cebu City, more than 500 motorcycles joined a motorcade for the “Sara Duterte for President Movement” on March 28 to convince the older Duterte to get her to run.

“I thank all of them for their trust and confidence,” Sara Duterte said. “Not everyone wants to be president.”

Ramon Casiple, a political analyst and vice president of consulting and research firm Novo Trends PH, said the signs still pointed to a likely run by Sara Duterte that would mirror the way her father’s last minute bid had energised his 2016 campaign.

“You are talking about the same set of tactics,” Casiple said.

Like her father, Sara Duterte trained as a lawyer before joining politics. In 2010, she became mayor of Davao, a city of more than 1.6 million people 1,000 kilometers from Manila.

Though she has never held national office, polls suggest she would beat potential candidates such as boxing superstar Manny Pacquiao and the namesake son of late dictator Ferdinand Marcos.

A victory could help protect her father against potential legal challenges in a country where losing the immunity of office can often open the way to the settling of political vendettas, political analysts said.

“No one can protect Duterte better than her,” said Carlos Conde, Philippines researcher for the New York-based Human Rights Watch.

LOYAL TO FATHER, QUESTIONS OVER POLICIES

Sara Duterte, like her father, has a reputation for being tough. She has openly traded barbs with the president, but few doubt her loyalty.

During her confirmation as a reserve army colonel last year, a senator asked her why the president had repeatedly said he was afraid of her.

“That is just in his mind,” said Sara Duterte, in a crew cut and formal military uniform. “I have always supported him.”

Continuity would also be welcomed by the bureaucrats and tycoons who prospered under Duterte’s rule, said Earl Parreno, author of a biography of Duterte titled “Beyond Will & Power.”

Whether Sara Duterte would keep to her father’s policies is another question.

Sara Duterte showed her independence some three years ago when she united political factions to oust one of the president’s allies as lower house speaker.

She has not been so outspoken on the bloody drugs war that has been a centrepiece of Duterte’s administration, but has said prevention and rehabilitation should be part of drug policy, while adding “law enforcement should be quick to the draw.”

She has also not been as close to China as her father – whose close ties to Beijing rattled the traditional alliance with the United States and a domestic security establishment with close U.S. ties.

“We should be a bystander in the China vs US issue,” she told Reuters.

Car sales recover in May

Car sales recover in May